September 25th, 2021, Update #2: Changed the instructions in the Webserver Configuration section from BusyBox HTTPD to the more reliable Apache2 alternative. This is motivated by unreliable results when using BusyBox.

Sonoff devices are very popular home-automation devices developed by a Chinese company called ITEAD. By default, they are controlled by a closed-source application developed by ITEAD–called EWeLink–that can be installed onto iOS and Android cellphones, for example, making use of cloud services. However, this makes it hard to integrate with existing home-automation servers, such as Home Assistant and OpenHAB, or to simply control the devices locally–that is, without access to the Internet.

Fortunately, there are alternatives that require flashing a different firmware onto Sonoff devices. The Tasmota firmware, for example, is a well-known alternative that provides easy integration with existing home-automation servers and let users control devices via multiple methods, such as webUI, HTTP requests, and MQTT, all of which can be accessed either locally or remotely or both. On top of that, it is free and open-source. Traditionally, flashing a Tasmota firmware onto a Sonoff device involves finding a serial connection, soldering a few cables/pins, and connecting the device to a serial-to-USB adapter. However, more often than not, this takes time, knowledge about electronics, and soldering very small components.

ITEAD is aware that many users do not user their app or even their firmware for Sonoff devices. Instead of forcing the use of their own software, recently, they have taken the much smarter path of making it easier for users to control Sonoff devices independently of their software via the release of a DIY mode in the latest firmware versions. In DIY mode, it is possible to use the device’s RESTful API to monitor and control a variety of attributes, such as toggle a relay ON/OFF, checking the wireless signal quality, and more importantly for any Tasmota enthusiast, flashing custom firmware over-the-air (OTA).

In this tutorial, I will describe how to flash the tasmota-lite.bin binary onto Sonoff Mini relays and any other Sonoff device that can operate in DIY mode. This will be done OTA (wirelessly) using only curl to send POST requests and then either the BusyBox HTTP Daemon (busybox httpd) or a common webserver application (e.g., Apache, Nginx) to create a simple webserver to serve the Tasmota binary to the local network. There is no need to install and run any other application, executable, or whatever. Software-wise, we just need a terminal and web-browser.

DISCLAIMER.The procedure described in this tutorial is one-way. That is, once flashed the Tasmota firmware, it is not possible to go back to the original ITEAD firmware.

ATTENTION. From this part and on, the tutorial describes procedures that involve working with mains power. If you have not taken the necessary time to learn how to work with it safely, stop right now and ask for someone knowledgeable to assist and teach you. Do not take this warning lightly. Mains power can kill you or set your house on fire or both (or worse). Be safe.

Only follow this tutorial if your Sonoff device satisfies all of the following criteria:

That said, it’s possible that this tutorial is partially or completely applicable to other Sonoff devices that can operate in DIY mode. The ones listed here are the ones that ITEAD listed as supported.

You won’t need to do any soldering and won’t even need to open the device. However, we will need to power the device using mains (110-220v AC) power. For the Sonoff Mini, for example, you need to wire it as follows: 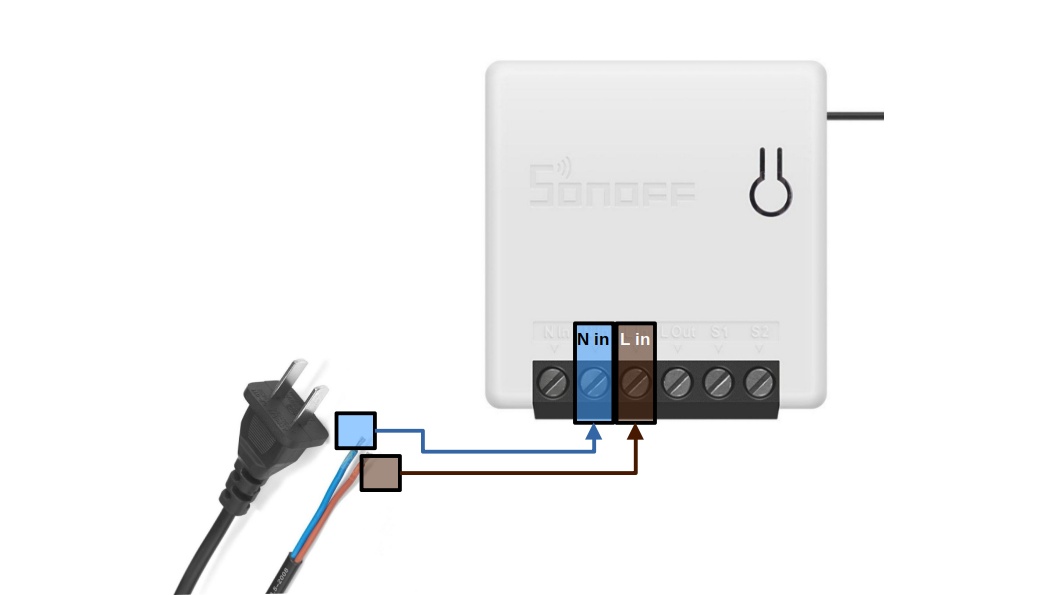 Please note that color conventions, outlet format, etc., are not always the same accross countries. Check (and double check) the ones in your country and property before wiring the Sonoff device to mains.

For other Sonoff devices, check their manual. At this point, you just need to provide power to the device itself–there is no need to connect it to whatever the relay is going to control, for example, or any switches.

Therefore, the only additional hardware requirements are the following:

I wrote this tutorial for GNU/Linux users. That is, unless otherwise specified, the instructions assume that you are running a Linux distribution on your PC/laptop that will be used to interact with (and serve files to) the Sonoff device. If running iOS, you might be able to adapt the procedure more easily than if you were running Windows or other OS.

Therefore, the only additional software requirement is the following:

Interacting with the RESTful API

The webserver has a few peculiar requirements (e.g., needs to accept the Ranges header, run in http instead of https) that does not allow us to point to Tasmota’s OTA website, Github releases, or any other official source of the Tasmota firmware binary. Fortunately, we can run a webserver on the local network that satisfies all requirements by the ITEAD firmware and in my experience, the easiest way to do that is to either use the BusyBox HTTP Daemon or run an Apache webserver–or lighttp or Nginx, for instance, but do not try Python’s http.server or PHP because they do not accept partial content.

(Updated in September 25th, 2021.) When I first published this tutorial, I included instructions for BusyBox. Since then, however, I have had mixed results with it and switched to using Apache instead. More specifically, to create a minimal webserver using Apache to serve the tasmota-lite.bin firmware file to the Sonoff device, follow these steps:

If you would like to use another common webserver, such as Lighttpd or Nginx, install any one of them using your system’s package manager and then copy the files in your user’s Downloads/tasmota dir to the webserver’s root, which by default is usually on /var/www/html but might change depending on the application used and Linux distribution.

Before wiring your device to anything else, you should first configure and test it. Configuration-wise, there is a lot of possibilities with a Tasmota firmware. If you’ve never used Tasmota before, check Robbert’s (The Hook Up) introduction video:

At the very least, you should update the firmware Template to use the one appropriate for your device. Templates are device-specific definitions of how their GPIO pins are assigned.

If you installed a pre-compilled firmware, there’s a chance your device is using the incorrect timezone. To check the current timezone, go to the webUI main page and then Console. Now, type the following:

and if that is incorrect, to change it, enter the same timezone command with a value equal to your region’s standardized time zone timezone. For America/Sao_Paulo, for example, that would be -3, which can be set in your Tasmota device as follows

Tasmota is a featureful firmware and it is worth taking a look at the official documentation to learn about the possibilities. If you run into issues, go to their Github repository, search their open and closed issues, and if you do not find an answer to your problem, open a new one.

Come back to this website every once in a while to check for changes in the changelog. I try to keep all my guides up-to-date as much as possible because I actually use them myself.